Greek paper icons are devotional prints that flourished from the 17th to the end of the 19th century. They depict saints or religious scenes, and often include panoramic views of monasteries, with accurate depictions of their buildings and the surrounding area together with scenes of monastic life, and representations of the monastery’s patron saints, thaumaturgical icons and miracles connected with them. Inscriptions provide a key to the various scenes and give additional information about engravers, or the donors who commissioned the works. The prints were addressed to a wider, less educated public than guides in book form and were given by travelling monks to the faithful, encouraging them to support their monastery or make a pilgrimage to it; alternatively, they were kept as mementoes of a visit to a particular monastery.

Venice and Vienna were originally the biggest production centres of Orthodox religious prints but printing workshops later appeared in the Balkans, Moscow and, by the end of the eighteenth century, in Constantinople and on Mount Athos. Though important in the history of graphic arts in the Balkans, relatively few of these prints have survived (the authoritative catalogue by D̲orē Papastratou, first published in 1986, lists 618 items). It was only in the late 19th century, with the revival of interest in folk art, that they became collectable (like Russian religious lubok prints).

The British Library has a small but choice collection of 11 Greek paper icons kept at shelfmark HS.74/2135. All are views of Mount Athos monasteries, printed in Vienna (nos 1,8), Venice (nos 2,5) Moscow (no 6) or Mount Athos (nos 3,4,7,9,10) between 1764 and 1879. They are all mounted on board, 92 x 57 cm in size. Two prints (nos 5 and 9) are duplicates. The list below gives brief notes about the prints and includes their catalogue numbers in Papastratou’s  indispensable work, which provides fuller iconographic descriptions, transcriptions of texts, and information about variant versions. 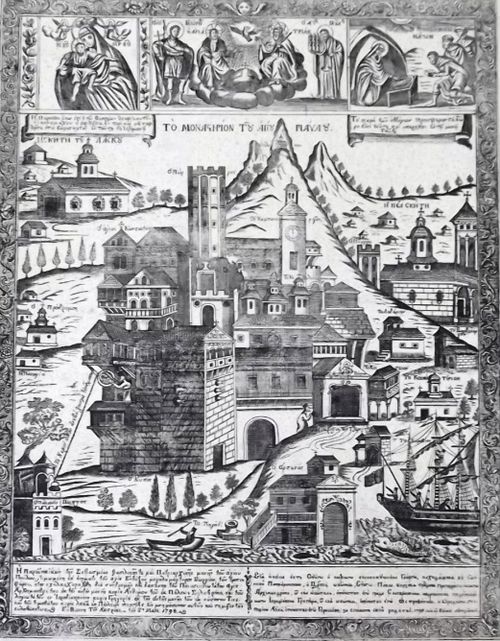 There are three registers. In the top register, the three images show, left to right,  the Icon of the Virgin which was miraculously saved after it was thrown into the fire by the iconoclast Emperor Theophilos (813-842), the Holy Trinity with St George and St Paul (the monastery’s patron saints), and the adoration of the Magi (whose gifts, as the inscription reminds us, are kept in the 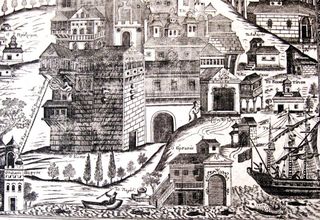 monastery). The magnificent view of the monastery in the central and largest register, includes an abundance of details: a boat pulling into dock, the monastery’s shipyard (Ταρσανάς), a monk drawing water from a well with a pulley and a chain, another fishing in a sea teeming with creatures including a sea-monster (κῆτος); various buildings and other locations are named in the image. Finally, the text (in Greek and Church Slavonic) at the bottom register gives details of the donors. The influence of earlier Western art on this and other landscapes in paper icons can be seen comparing it to Fra Angelico’s Thebaid in the Uffizi. 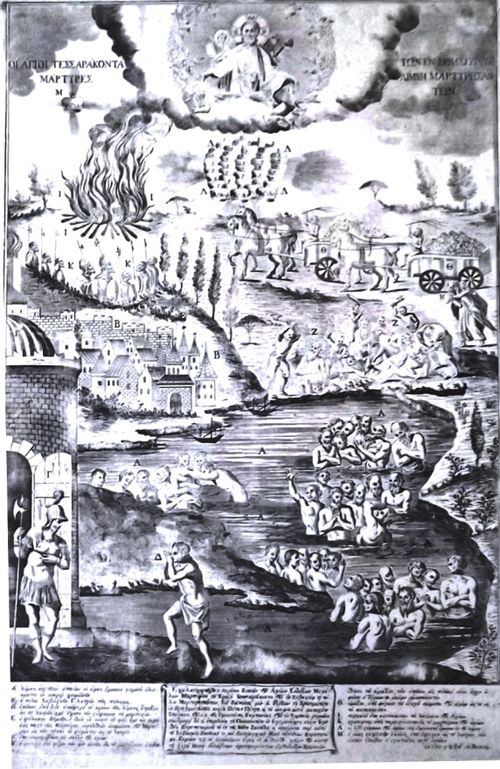 The Monastery of Xeropotamous is dedicated to the Forty Martyrs of Sebaste, a group of Roman soldiers who, in 320, converted to Christianity and were condemned to be exposed naked upon a frozen lake near the city of Sebaste (present-day Sivas in Turkey). One of the soldiers lost heart, left his companions and sought shelter in a warm bathhouse (left). His place was taken, however, by one of their guards who, seeing the crowns of glory shining in the sky, proclaimed himself a Christian and joined the other thirty-nine. The frozen bodies of the martyrs were carried away in carts and burned, and their ashes dispersed though some were preserved as precious relics. The subject was popular in Byzantine art, thanks to its dramatic potential; the various stages of the story are here clearly depicted and explained in the accompanying key to the characters and action. The names of the donors are also given. 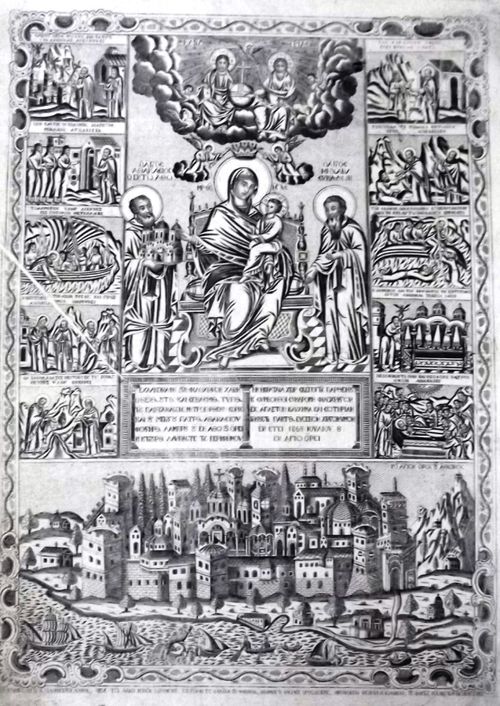 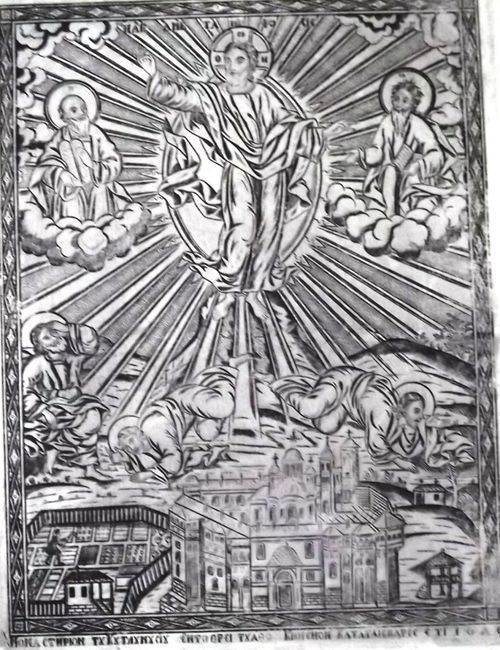 The monastery of Monastery of Koutloumousiou is dedicated to the Transfiguration of Christ which here occupies a larger than usual part of the print and is better integrated into the landscape. As in the much copied and imitated Raphael prototype of which this is a distant echo, the radiant Christ is at upper centre between Moses and Elijah, and Peter, James, and John are crouched in disarray below. The lower part shows the Monastery of Koutloumousiou with, at left, a monk ploughing a field and, at right, a Phiale for the blessing of the waters, and a chapel. 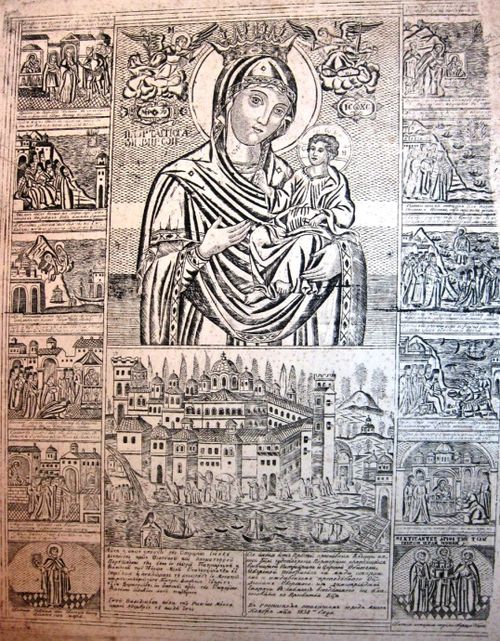 The Monastery of Iveron is dedicated to the Dormition (Assumption) of the Virgin. Its name denotes that it was founded by ‘Ivērites’ (i.e. natives of Georgia). The icon is that of the Virgin Portaïtissa. According to legend, a widow from Nicaea (Νίκαια), in north-western Anatolia (part of modern İznik) threw the icon into the sea to save it from destruction by the soldiers of the 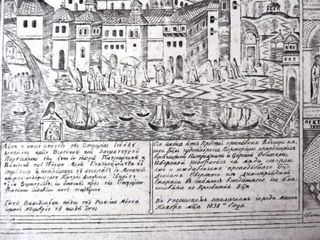 iconoclast Emperor Theophilos. The waves brought it to the coast of Ivēra where it was found by Gabriel, a monk in the monastery, who placed it in its Katholikon(the major church building in the monastery). The icon was later lost three times but each time it miraculously re-appeared at the gate of the monastery (hence its name). At left and right there are 12 scenes, 10 of which illustrate the history of the icon. Under the icon there is a view of the Monastery of Ivērōn and its seashore and, below, a parallel text in two columns, in Greek and Church Slavonic, gives the names of the donors. The engraving was first published in Halle in 1794. This 1838 printing includes some new details, for example the figure of the monk in the foreground (presumably Gabriel) holding the icon. 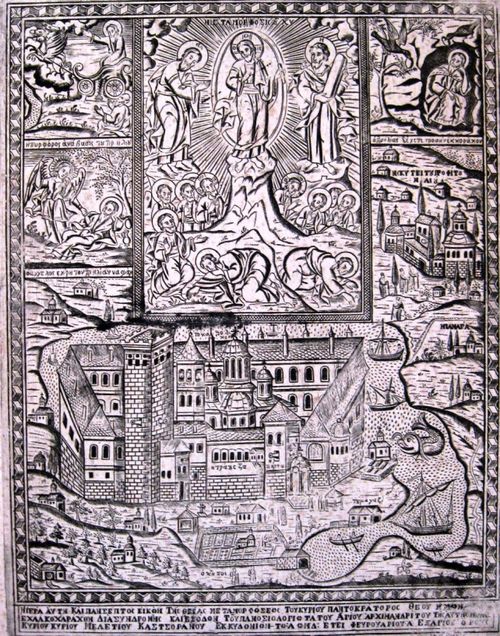 The Monastery of Pantocrator is, like the Monastery of Koutloumousiou, dedicated to the Transfiguration of Christ. The icon of the Transfiguration is framed at upper centre with Christ, Moses and Elijah above and nine apostles shown kneeling or prostrate below. Three scenes from the life of Elijah are shown: at left, his ascension in a chariot of fire and, below, the angel appearing to him; at right, the prophet fed by ravens. This is a variant of a 1779 engraving with notable differences  in the landscape. 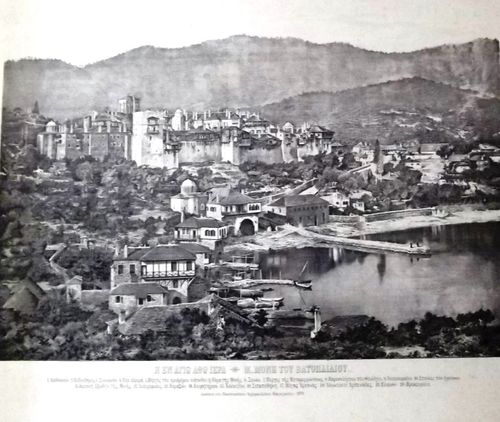 This panoramic view is the only lithograph in this collection, and derives from a photograph. Stylistically it is very different from all the other prints in the collection and the only one without an icon or patron saint component. The inscription provides a key to 20 buildings of the monastery and the identity of the donor. The Transfiguration here occupies the upper half of the engraving. The monastery is shown at lower left, with St Anne carrying the Virgin and, in a reliquary on the ground, one of the most treasured relics in the monastery, the right leg of St Anne. 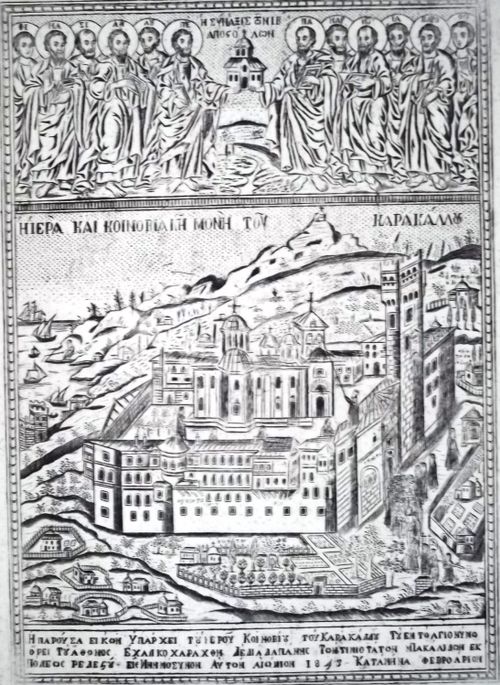 The top register depicts the Twelve Apostles, with Saints Peter and Paul (the monastery’s patron saints) in the centre. The inscription at the bottom register indicates that the engraving was commissioned by the grocers of the town of Redestos, and executed by Kyrillos, an Athonite monk. Kyrillos was active between 1834 and 1862.